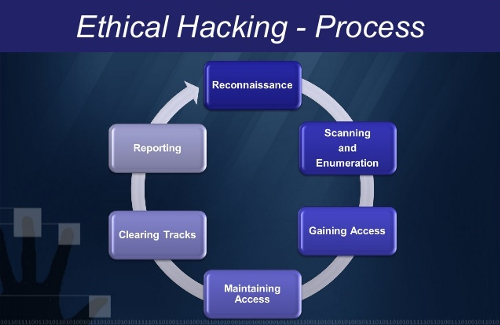 Cyber criminals are consistently hunting for vulnerabilities and weaknesses to exploit. Finding just one vulnerability may be all they need to gain access to an organisations critical assets. Cyberteam Security systematic infrastructure.

security testing and validation offer real help to IT support teams to identify vulnerabilities timely and, through additional screening, to understand whether they can be exploited.

In practice, the majority of penetration testing engagements we do, will involve the following four steps:

As part of discovery, the Cyberteam Security team collects information about the organisations networks, servers, ports, applications and services to determine testing scope, with a focus on critical assets. The Discovery stage is achieved by using foot-printing, scanning and enumeration techniques. This information will provide the Cyberteam Security team with an accurate IT architecture overview and required insight where probable vulnerabilities or weaknesses could occur, and where valuable information is stored and available. The output of the discovery stage is then documented as an organisations blueprint.


The information gathered from the Discovery stage is used to apply scanning and testing techniques, which will allow identification of vulnerabilities and weaknesses in the networks, servers, systems and applications, with a focus on critical assets.

Two main activities are part of this step:


The audit of security flaws can be done in two ways:


After the Stage 2 Verification stage, the Cyberteam Security team experts produce an infrastructure security testing report on the testing performed and the information obtained on vulnerabilities and weaknesses that result in security flaws.

The report contains as a minimum the following items:


The recommended security remediation and mitigation actions are presented through a proposed action plan. The Cyberteam Security team can support in applying the suggested remediation and mitigation actions; for example, by performing additional testing, assisted patch management, source code review, and architecture design and configuration review.


After the remediation stage, a rescan is recommended to validate that all of the necessary remedial actions have been implemented successfully. This re-scan performed using the same vulnerability identification methods.


The Cyberteam Security team applies industry standards and best practices as part of its infrastructure security testing and validation methodologies. We conduct white box, black box and grey box penetration testing, and implement targeted security testing, which is suitable for an organisations unique IT infrastructure.

We aim to provide our customers with optimal insight and actionable plans to effectively remediate and mitigate their cyber security risks.

The security scanning information shown above is mostly generic and based on best-practice, therefore to get a better understanding on what we can do for your business, all we ask is that you contact us to discuss your cyber security scanning needs to protect your IT systems and data.
Click here to contact us